From singers to drummers, roadies to rock critics, music is an industry still overwhelmingly dominated by men – but perhaps not forever. A new study of those taking up the guitar has found that half of new learners are women and girls, suggesting that the future of rock, metal and indie might just be 50% female.

The survey by the guitar manufacturer Fender found that in the US and UK, a phenomenon it had originally assumed was a short-lived blip inspired by the popularity of Taylor Swift was in fact enduring and worldwide. 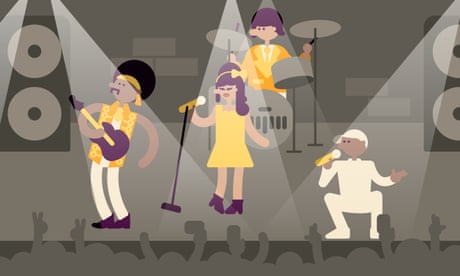 “In fact, it’s not. Taylor has moved on, I think playing less guitar on stage than she has in the past. But young women are still driving 50% of new guitar sales. So the phenomenon seems like it’s got legs, and it’s happening worldwide.”

Fender’s UK team had been surprised that half its sales were to girls and women, he said, “but it’s identical to what’s happening in the US”.

Following the previous US study, Fender changed its tactics to target millennial women, launching a new range of guitars in 2016 and enlisting the female-fronted indie bands Warpaint and Bully in its marketing campaigns.

Almost three-quarters (72%) of those picking up the guitar did so because they wanted to gain a life skill or better themselves, according to Fender’s survey of 500 new and aspirational guitarists, with 42% saying they viewed the guitar as part of their identity.

There were some differences in how women and girls in the UK and US liked to play; half of all British respondents said they preferred to play privately, 18% more than in the US. But not all wanted to be rock stars: across the board, 61% said they simply wanted to learn songs to play socially or by themselves, rather than make it big on stage.

Despite the success of bands such as Wolf Alice, whose lead singer Ellie Rowsell plays guitar and who recently won the Mercury music prize, live music in the UK remains overwhelmingly dominated by men, with a Guardian study last year finding that two-thirds of live acts had no female members.

There is no shortage of female guitarists and female-fronted guitar bands who have received commercial and critical success, including Brit award winner Laura Marling, the Californian band Haim and PJ Harvey, the only artist to win the Mercury music prize twice. But many say they still have to battle in a male-run industry.

“I don’t think it’s a particularly good time [for women in bands],” said James Hanley, senior staff writer at Music Week. “That’s borne out by the festival line-ups that get filled with [male performers].”

To the music critic Caroline Sullivan, the increase in women taking up guitar might be explained by millennial women wanting to play an assertive instrument “whose whole basis is: look at me”.

“It doesn’t surprise me that a lot of young girls are taking up the guitar, because playing guitar seems much cooler and more dominant than doing the traditional female thing of standing behind a keyboard looking pretty.

“Back in the day, girls wanted to sleep with the musicians. It’s much easier now to say, I want to do what he’s doing.”

With the notable exceptions of Swift and Ed Sheeran, on the whole, guitars have become less prominent in popular culture as pop and rap have come to dominate the charts. The kind of rock and indie bands that sold millions of records in the 20th century are now a relatively marginal concern.

A potential problem for the guitar manufacturing industry was identified by Fender in 2016, when it found that 90% of first-time guitar buyers stopped playing within a year, curtailing the market for multiple purchases.

But – perhaps driven by women – there is evidence that guitars are making a comeback: the research firm IBISWorld found earlier this year that sales had been growing for five years and were projected to keep growing into 2022.

Courtesy of The Guardian https://www.theguardian.com/music/2018/oct/17/half-of-beginner-guitarists-in-us-and-uk-are-female-survey-says